The Memorial Day long weekend has just passed here in the states.  Memorial Day is a national holiday and marks the remembrance of those men and women who have died in service.  And not to confuse Memorial Day with Veterans Day:  ‘Memorial Day’ is a day of remembering and honouring those who have died during service and ‘Veterans Day’ is to celebrate the service of all US military veterans.  We remember and we thank you.

So, its a long weekend and what better way to celebrate than to hit Las Vegas for a few days!  And sure, Vegas is glitz and glamour and tack and trash all rolled in to one slightly tatty yet fabulous package, so what’s not to love. You can get hitched at the Little White Chapel where Sinatra married Mia Farrow. You can declare your ‘hunk-a-hunk (of undying) burning-love’ in front of an Elvis impersonator. You can have a drive-thru-wedding.  You can be married almost anywhere, anytime day or night (most run 24 hours a day – no blood test required) and a licence will set you back around $55.  The average cost for a divorce however is around $450 unless you scoot over the border to Mexico and have it all annulled there.

You can visit places such as Venice or Paris and not even leave the state of Nevada.  You can ride the roller coaster in New York (and we did!).  You can see the brightest lights anywhere in the world as there is around 15,000 miles of neon tubing on the strip and downtown alone.  And if all that’s not enough, then the ‘people watching’ entertainment alone will be well worth the trip.

Oh, and if you happen to go and shoot your neighbours barking dog while residing in Vegas then be warned.  Your neighbour can legally hang you for it!  I prefer their other law.  It is illegal to ‘drive’ a camel on the highway.  The punishment for that crime appears less harsh – you are required to sit through an excruciatingly painful Justin Bieber concert!  Actually no, that is a far more punishing sentence.

You knew this would be coming.  Vegas is the perfect place to indulge my obsession for Elvis impersonators!  Is ‘Elvi’ plural for more than one Elvis?

*  Food of Vegas –  There is everything here from Michelin-Star restaurants to celebrity chefs, from cheap to expensive to the quintessential culinary delight of Vegas.  The all-you-can-eat buffets!  Do a buffet just for the experience alone.  In fact, it should be compulsory for all visitors to do one while in Vegas. 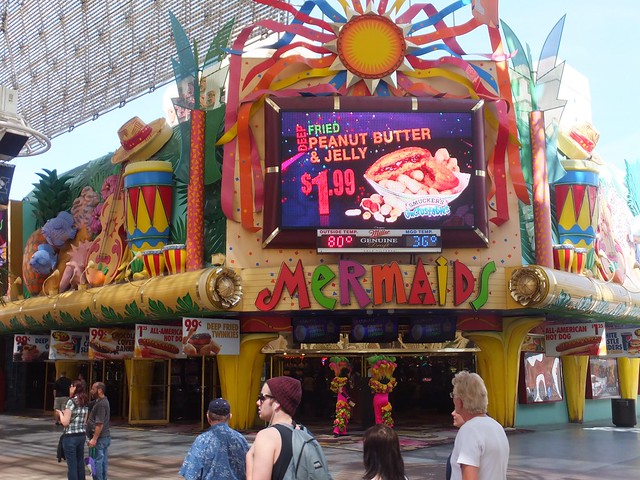 You know I had one!

*  Fashions of Vegas – I think almost anything goes here with regard to fashion.  In sin city you can actually turn up to a casino in your togs! (swim suit for those not from Queensland).  And anyone and everyone wears a swim suit here.  Be they big or small or huge, the two piece appears to be part of the mandatory dress code in Vegas (and strangely worn with high heels).  Others include:  A lady of unknown age (but lets say she could have been well over 70) wearing an outfit constructed entirely of varying lengths of string.  String!!!  I saw more old fake-tanned wrinkly flesh in two minutes than I will ever need to see again in my life time.  And may I just say, my ideal use for string would be for trussing up little Cornish hens or for wrapping brown paper packages.  Not for clothing!  The velour tracky pant also seems to be making a resurgence here too or perhaps it has just never gone out of style.  The said track suit pant more often than not, have something obscure emblazoned on the back of them too such as ‘juicy’, ‘butt’, ‘daddy’, ‘slutty’ or ‘phat’.  Why they had to advertise these facts I do not know when it was completely obvious!  Then there are the outfits which looked like lingerie.  No, actually they were lingerie!  And shorts.  The ladies like their shorts here and they like them very, very short and very, very tight! Did I feel a tad over-dressed at times?  Most certainly!

*  Getting around – You know the answer to that.  On foot (if you have the stamina)!  Vegas is a pretty good city to do on foot but it is tiring.  There is so much to see and do and the notorious strip is just over 4 miles in length.  That mileage doesn’t seem much but remember, its hot!  And it is even hotter when caught in a crush of people (which is often).  RTC Transit is another good way to get around.  It’s the bus service for the strip.  They run double-decker buses which are air-conditioned and clean.  A two hour pass is $6 but get the 24 hour pass for $8.  It is well worth the outlay.  From the airport to the hotels you can grab a cab for around $35 however there are some shuttle buses which cost around $11 per person.  We took the latter option and its good because you get a tour of Vegas as the shuttle goes to each hotel/casino to drop off other passengers.

*  Climate – Las Vegas is located in the Mojave Desert so even during the end of spring it was HOT.  Most of the days we were there, the temperatures were in triple digits and it gets hotter.  It is a dry heat but its still hot so do bring a hat and sunscreen (among other things drink plenty of water).  The temps at the Grand Canyon were much cooler though given it is approximately 7,000 feet above sea level.

Las Vegas isn’t for everyone but to be honest, they just don’t make places like this anymore.  Go with an open mind and don’t try to make sense of anything there because you just won’t.  And its definitely not a town for rest and relaxation.  For me however, Las Vegas has been brilliant.  It is one place that I can now happily scratched off my list of ‘all time fabo places to see and do’.

Vegas.  The place where aging rock stars go to…..

It doesn’t get any better than this!

Las Vegas is one hell of a wild ride but I guarantee you of one thing.  You can have the absolute glitteriest time of your life xx