Winter has well and truly settled itself in around Newcastle.  Some days this city seems empty when the rawest of cold hits but I somehow like those often deserted and sunlit streets.  This is a city I love and have come to know well.  A city of unrestrained chaotic redevelopment both good and bad, of near perfect days and complicated nights and best of all, a place of infinite possibility.

And with these wintery days came a bug which saw me struck down enough to seek the haven of my bed.  It seems it was one of those ‘take a breath and slow down’ bugs.  The sort of bug we sometimes catch which insists with its coming, take some time you got this.  Really you do.

While hold up in bed sharing my comfy real estate with the little cat for good company I longed for the ocean, read a couple of pages of some old books, willed myself to feel better and sipped pale green teas.  I scribbled some notes, ran a little mantra through my head every now and then, slept, and slept, and slept some more.

There was no reasoning for this but I woke early one morning and decided I wanted to see a monkey.  And that my friends, is not a statement you will hear me say often if I can help it.

I find monkeys incredibly endearing but years ago I had an encounter with a pretty scary monkey in Ubud which, not wanting sound too dramatic, is an encounter not easily forgotten (and that was well over 20 years ago).  And no, before anyone jumps to conclusions I did not feed, get too close, entice, smile at or do anything to elicit his very grumpy monkey attack.

But as I said, I like monkeys.  Not only are these charming creatures wildly photogenic, they are also complex and fascinating little souls of deep intelligence whose courage is only matched by their reverence.  And so very much like us, they too also experience a range of emotions from love and grief, happiness and compassion, trust and fear to surprise.  They are entertaining – NOT in an horrific circus way – and they are curious and mischievous.  They can also be, as anyone of us could, opportunistic, vain and a little aggressive……… as I was about to find out again.

Hailing a cab, which is scandalously cheap in Malaysia, it was off to the Penang Botanic Gardens.  A stunningly beautiful and peaceful oasis and home to both the Long Tailed Macaques and the Dusky Leaf Monkey.

I came across my first monkey within moments of alighting the cab.    It was a good start as the monkeys seemed mostly content to just sit about minding their own business, groom each other, look incredibly cute, snuggle their young (even more incredibly cute if that were possible) or eat what they had foraged from the trees. 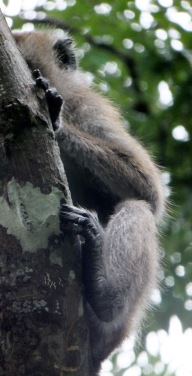 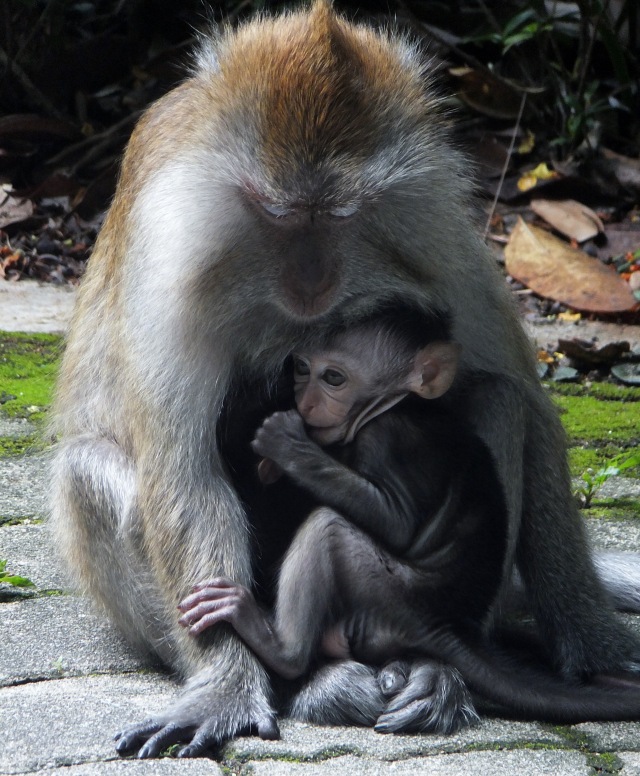 Serving as a big green lung for Penang, the Botanic Gardens are lovely with walking  tracks, trails and paths which take you through lush rain forests, around clusters of bamboo, past lily ponds and waterfalls, over old bridges and around topiary trees and the very peculiar Cannon Ball trees.  As it is also home to the monkeys, you get to see them in their natural environment, climbing trees and structures, playing, living in their family groups, interacting and being highly social. 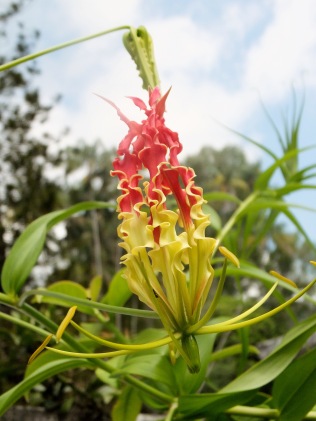 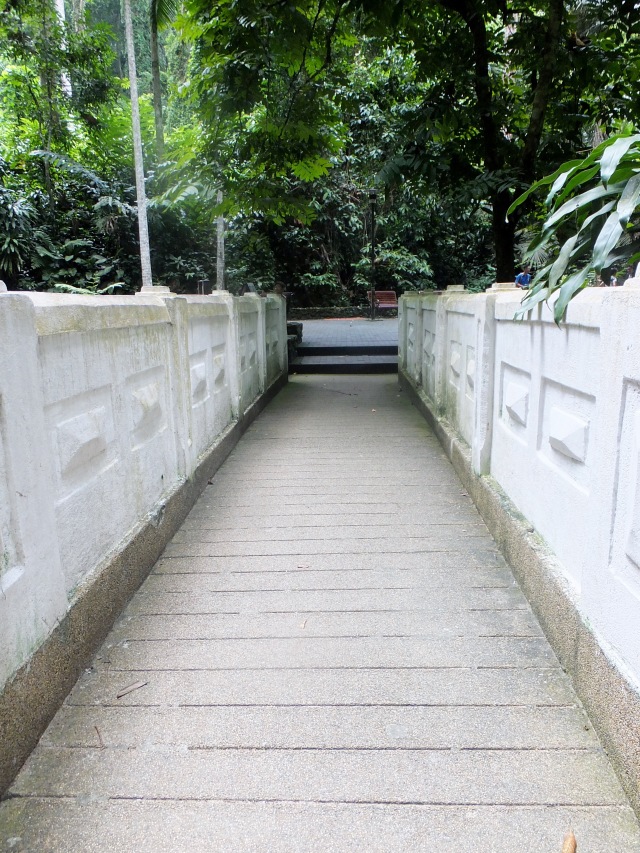 There are signs posted everywhere throughout the gardens requesting you DO NOT FEED the monkeys.  It’s not good for them and it is not good for us as it makes the monkeys trusting, dependent and in turn aggressive.  Remember, these are wild animals.

Fact:  It is my fate to have to occasionally spend time around stupid people!

It seems there will always be the one or two who completely ignore all rules or signage and case in point was the person who on this day who not only fed the monkeys (in a self-absorbed act to attract more monkeys around him for his #shit-for-brains photo opportunity), but then teased the monkeys by withholding the food to make them jump. 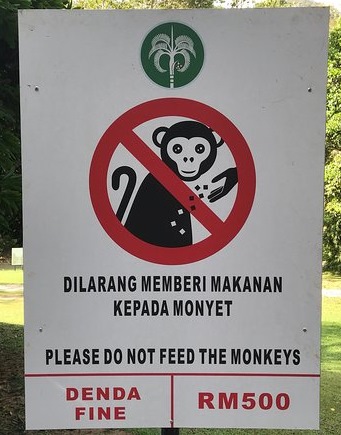 Now I had a couple of things to tick off my fabulous-to-do-list-for-the-day which also included Monkey Tree and Monkey Beach.  I know, call me theme predicable on this day but I never do things by halves, yet facing off against a small pack of very pissed off marauding monkeys led by the least jolliest of alpha males I had seen all day was certainly not one of them!  I somehow knew too I was about to re-experience a particular moment.  You know that moment.  It is the moment where you realise you are in a new, exciting and undiscovered place yet the experience you are about to have has an old familiar ring to it ……….and not in a good way! 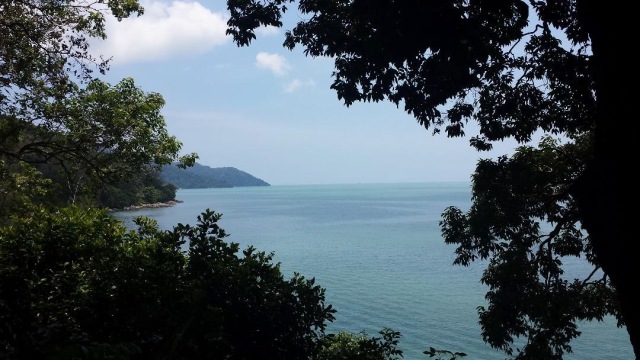 As a ranger approached #shit-for-brains, the monkeys legged it………in my direction.  Quietly, I stepped off my intended path and although I kept my eyes downcast I kept them well and truly on the wily old jackanapes who was leading them.  This alpha male wasn’t quite done with humans just yet as he did, after all, have a score to settle and he wasn’t about to lose face either with his dedicated band of monkey followers.  Plus he probably now viewed all humans as nasty food withholding, self centered pricks and thoughts of exacting a little monkey revenge would no doubt top off his morning.

He changed direction and picked up a speed while heading right toward me.  Then, as expected, came the very familiar and not easily forgotten raucous screech.  A banshee like scream that will chill your blood followed by the baring of large, sharp yellow teeth.

Fact:  Monkeys are no longer cute once you see their teeth! 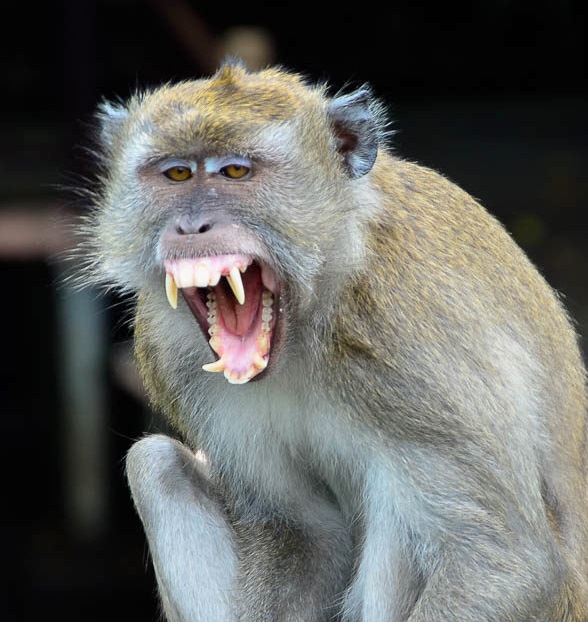 This was going to be a make or break moment but I knew I had to be the one to decide the outcome of this confrontation.  Being 157cm I managed to pull myself up to an intimidating 160 cm, I know, super daunting to a monkey (I hoped) and just as impressive to me as I was wearing flats a the time.  I stood my ground and faced him down while unfurling my hands to show open palms, my years of watching David Attenborough doco’s finally paying off.

He showed his teeth again, loped forward then stopped.  We looked at each other for a moment almost considering our next moves then he slowly turned and stalked off leaving me with an impressive view of his monkey overlord arse.

If this little dude had thumbs there would be serious snapping………

And me, well I owned it.  I walked off feeling pretty chuffed.  I think I may even have high fived myself or at the very least skipped.

I did actually skip……… and it was in the direction of the strongest cocktail available on the island of Penang!

Truth:  GO SEE MONKEYS in the wild.  They are brilliantly amazing 🙂   Just don’t be a stupid, inconsiderate human jackass when you do…….x

8 thoughts on “Fact: There is monkey business in Penang…….”