Fenway Ballpark:  a place to ponder the mysterious Red Sox fan and one of Americas best loved ballparks.  The park is over 100 years old and there was nothing more enjoyable on a cold winters day than to be skulking around this sacred turf with a guide who had one of the best Boston accents I have ever heard.  During this tour you get to sit in the oldest seats in all of major league baseball, sit in the press box, hear great stories and they encourage you to take literally a gazillion photos.  This year-round tour is a must if you ever find yourself in Boston…..and you don’t even have to be Red Sox fan to enjoy it.

Bleacher Bar:  So named because this bar is located right under centerfield wall which happens to be right under the bleachers. This is a great little bar and a definite must stop on the way from sight seeing Fenway.

The New England Holocaust Memorial Boston: A very beautiful and thought provoking memorial along the Freedom Trail of Boston.  The memorial has six illuminated glass towers symbolically etched with six million numbers representing the six million Jews killed in the holocaust.  It is a walk-through memorial where the inner walls are inscribed with quotes from survivors of each camp. Steam rises up from between the grates of the dark floor where tiny lights twinkle.

Faneuil Hall Marketplace and Quincy Market:  Right in the heart of downtown Boston Quincy Market is a treasure trove of food stalls, restaurants and shops.  I also like to think Quincy Market is named after one of my favorite actors Jack Klugman.  Steve did not find my history lesson on the naming of the hall credible however he was not, by his own admission, a fan of ‘The Odd Couple’ or ‘Quincy’!  Faneuil Hall, constructed in 1742, also holds small market like shops and a museum and armory of the Ancient and Honorable Artillery Company of Massachusetts.

Freedom Trail:  this is one of the best introductions to Boston’s fascinating history.  Follow the red brick path that winds through Boston for 2.5 miles past sites such as the Boston Massacre, Boston Common, Old North Church and Paul Reveres House. 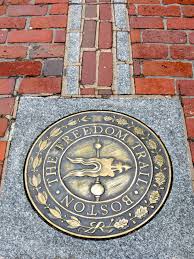 Cannoli’s:  I do love a little decadence served in a little white box tied with string……these are a few of my favorite things.  Boston’s bakeries, especially true of those in the North End, are know for their long lines and cannoli!  After eating some pretty serious food in Boston you may not think it is humanly possible to squeeze a cannoli (okay three) in.  For this one act alone however, you will be richly rewarded. 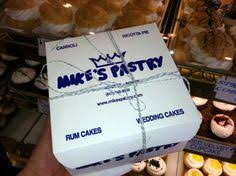 The frozen ‘Charles River’ in Boston….see, I told you it was cold!!  Does frost bite build character??