While on the road, although spirited and optimistic, I held two hearts.  One was enjoying the outback and the balanced beauty of this land.  That vast and very remote landscape of spindly saltbush, scrub and Mitchell grass so dry neither feral goat nor cattle could eat it and the bone-dry river beds where I could taste the dust and smell the eucalypt. 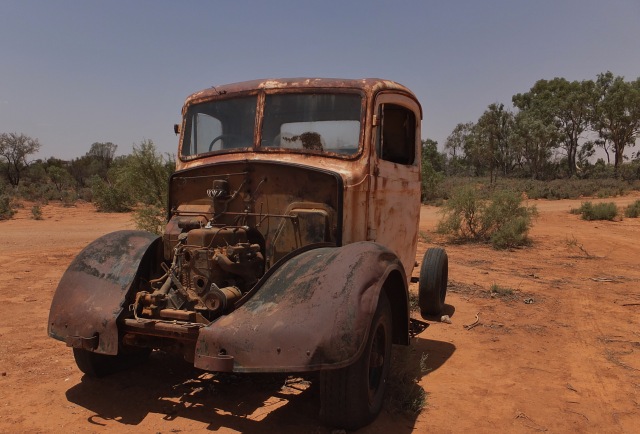 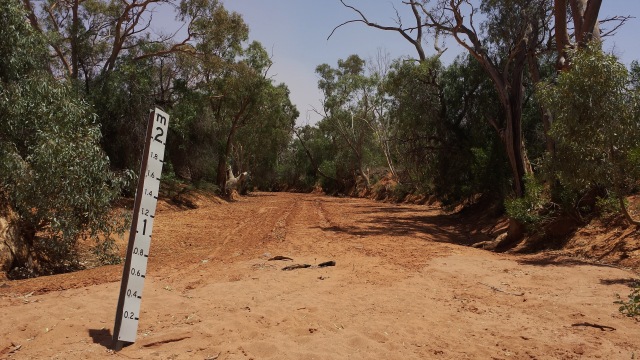 The other, the one furthest from me, craved the ocean swell.  Things like that cannot be taken for granted.  I will never deny the beauty of the ocean and the call it has to me which sometimes feels like an almost physical tug.

Before leaving Cobar and with the early morning sun flooding and the day already heating up, we u-turned back to Fort Bourke Lookout to view the open cut copper mine.   The huge land scar is profoundly deep.  A yawing chasm of dirt with the rich mineral belt clearly visible, devoid of vegetation and with the township of Cobar as its backdrop. 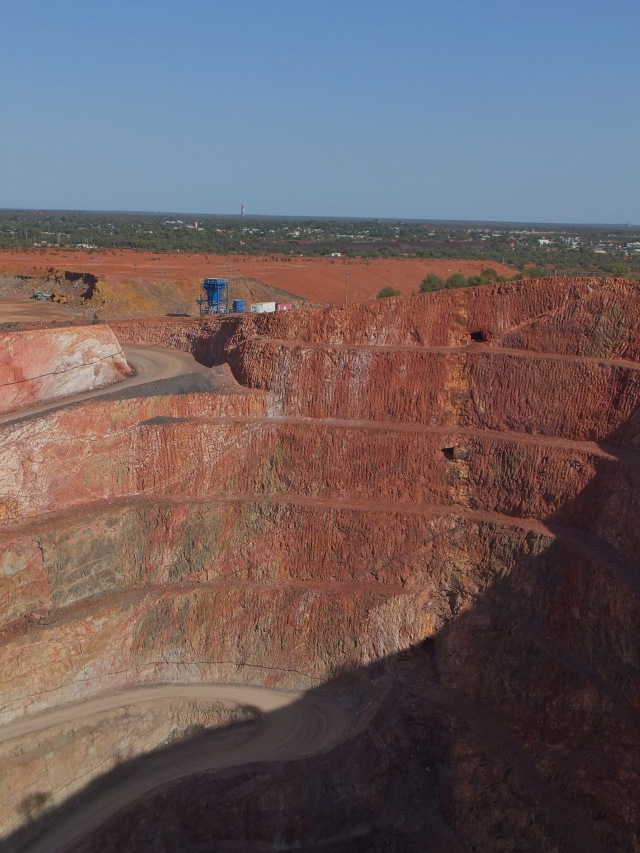 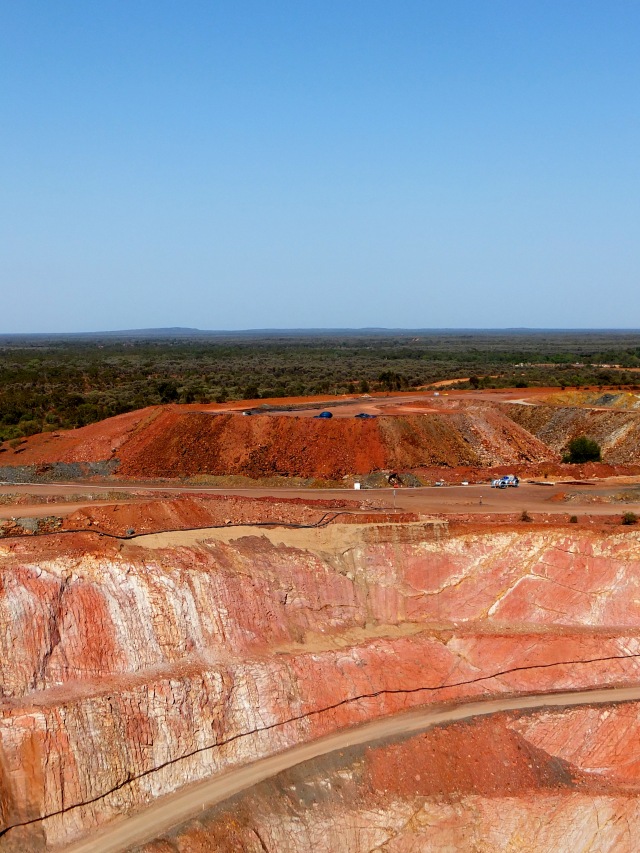 Christ it was hot and it had not even gone 8:30 am.  I could feel beads of perspiration run down my spine, soaked up by the waistband of my shorts.  It was time to move on.

Packed in my car were not only treasured items but a relentless optimism always dragged along for good measure.  I am forever charmed by what others find frustrating, unattractive or irritable.  Made inquisitive by negativity and pessimism and driven by a need to accept what others do not.  Case in point, Wilcannia.

In almost every town I had stopped, folk – generally of a certain demographic – advised me NOT to stop in Wilcannia.  The advice was to drive straight through yet I had an entirely different view on the matter.  Plus many months prior to me knowing of this move, my dear friend Keith (aka one half of the ‘dirty chai runners’) told me if I ever happened to find myself skulking around the vicinity of Wilcannia, I should drop in.  So I did.

Located on the banks of the Darling River with its rich history and lovely heritage listed sandstone buildings dating back to the late 1800’s, Wilcannia was once a thriving river port during the great river boat era of early Australia. 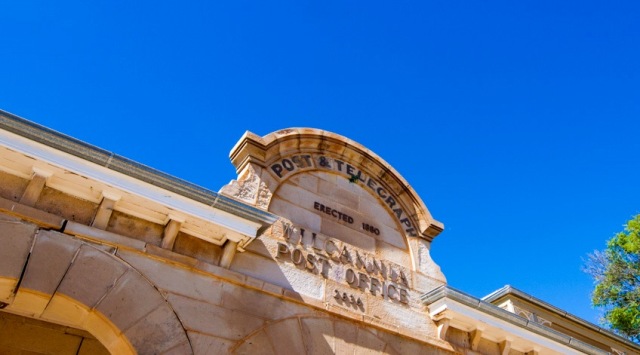 I noted the rusted security grills, boarded up buildings, small pockets of graffiti tags and the smattering of locals all of which exist in most small towns.  These were the things I had been warned of yet on first impression, Wilcannia did not appear the shit hole I had been told to avoid.

We pulled up in the main street, parallel parking outside of the IGA and headed inside.  We had planned to grab some bread rolls, ham and cold drinks before heading down to the river.

The store had neither bread nor ham and nor did it have any fresh fruit or veg with the exception of a couple of bags of spuds sweating and sprouting in their plastic sacks.  Processed food, bags of chips and double that of cheap confectionary lined the shelves alongside soft drink and other dust laden products.  The store was as depressing as the woman on the register and I could not reconcile at how this vulnerable community must cope.

We headed across the highway to the Liberty Road House which I will happily recommend.  There were two young guys behind the counter who after chatting with them, cheerfully whipped up a couple of rounds of fresh sandwiches.  Their openness and honesty about the town, the frankness of themselves (one was on community service) and their outlook on life was refreshingly honest.

Eventually I wandered back out into the heat of the day to watch the vehicles on the Barrier Highway continue to drive straight through, their passengers not daring a sideways glance to the town, its heritage or its residents.  I was perplexed but not entirely surprised because this is what no one tells you about Wilcannia.

Wilcannia has one of the oldest cemeteries in western New South Wales with grave sites dating back to 1866.  The cemetery is a nod to our rich pioneering history, tragedy, resilience, cultural preservation and a new and colourful tradition.

Among the eroding headstones and rusting iron are war graves, family plots and the poignant graves of children, often tiny infants, too numerous to count.  Many sites have fallen into disrepair, many are unidentifiable and many remain unmarked. 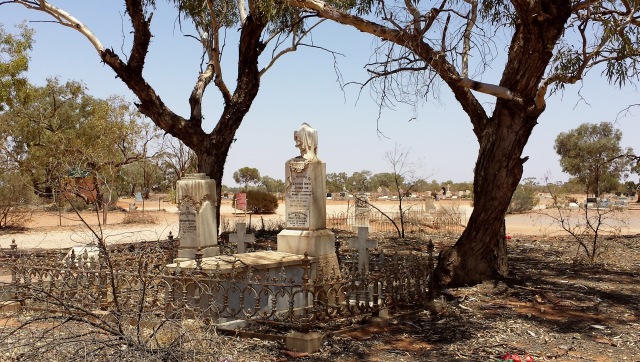 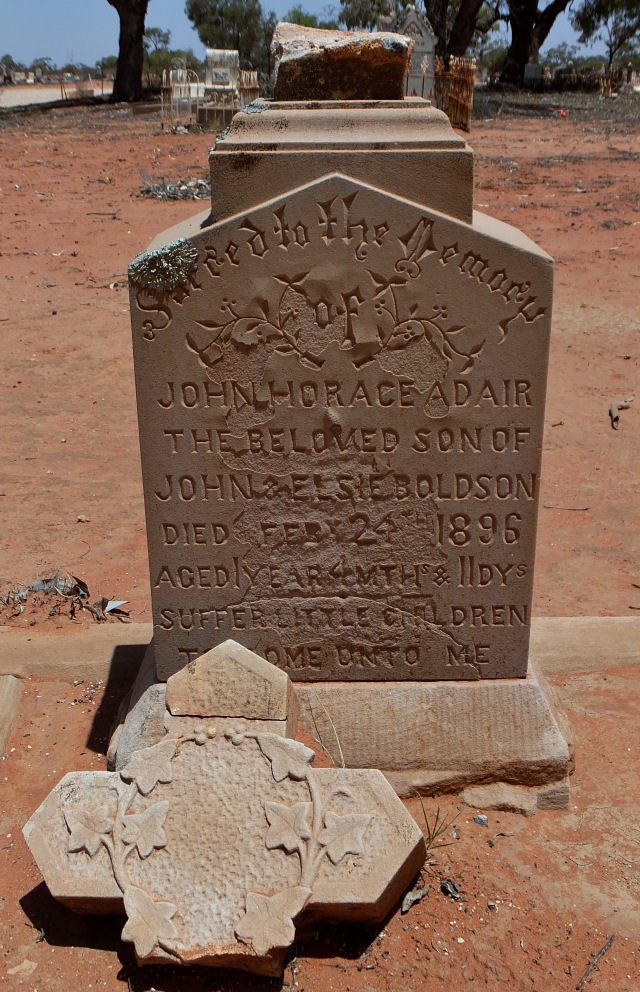 The cemetery, set amongst old gums and saltbush, was incredibly quiet and astonishingly hot yet we managed to spend hours here. 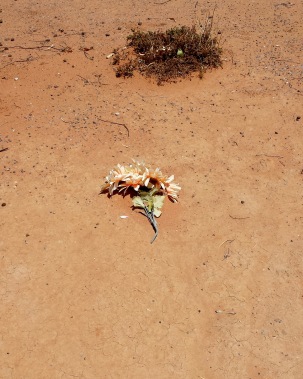 Due to the large Indigenous population in the area, Wilcannia has a death rate a third higher than the national average.  Death is an expensive business and made even more difficult by isolation and a low socio-economic status with some Indigenous grave sites being without a headstone for more than 25 years.  But all that changed when an inspiring art project recently began teaching people the skill of mosaic head stoning.

The ‘Paaka Thartu Karnu Healing Project’ teaches people the art of mosaic and in doing so, beautifully personal and affordable headstones are being made for departed loved ones. 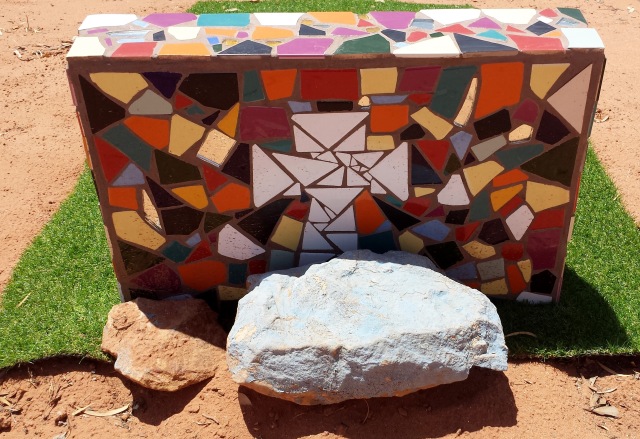 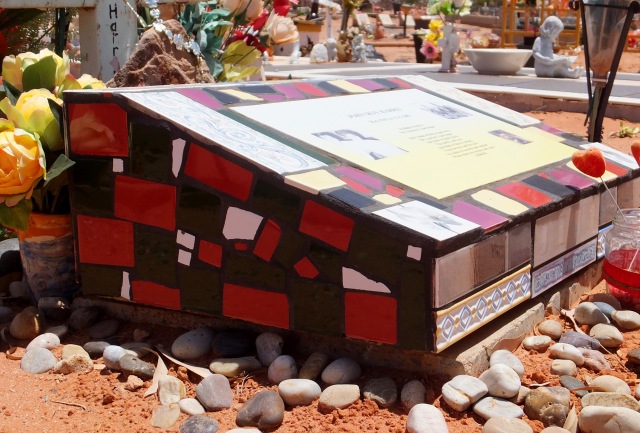 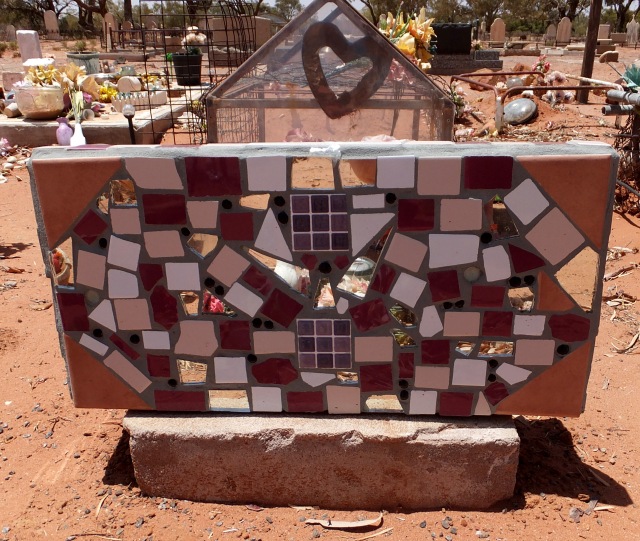 This is an odd thing to state but this cemetery is achingly beautiful with its mix of mosaic headstones and heritage grave sites all of which simultaneously uplift yet break your heart.  I loved the mosaics for the richness, inspiration and closure they bring and there is no overstating the power that gift must offer those left to grieve. 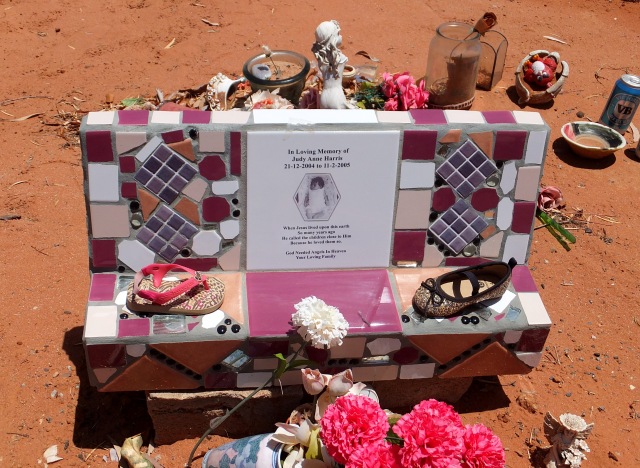 We spent hours in the cemetery and were the only ‘visitors’ except for the local roos and the time spent there instilled in me further how inaccurate and misleading the image peddled of Wilcannia really was.   Yes there was poverty and a weariness to the town but this is also what made it so very, very real.

Time moved along yet somehow, it seemed not to matter much out here. We did however, need to hit the road again as we knew from experience we did not want to travel these highways after dusk and Broken Hill was just under 200k away.

As I rounded a bend I spotted a large dark shape by the very edge of the road.  It was fresh road kill.  A once massive black feral pig, no doubt slain by a road-train due to its size. Checking the rear mirror for another driver, I veered to the opposite side of the road.  Just as I did, a huge monitor lizard longer than the width of my car darted out from behind the carcass to run straight across in front of me.

I hit the lizard immediately, the force so great my car lurched and shuddered and the wheels lifted. My hand went to my mouth and I looked in the rear view mirror to see, thankfully, that death had been instantaneous.

With tears welling I pulled up then stepped out of the car.  Devastated by what I had done, I looked back to see the huge goanna splayed across the road.

I stood for a moment then squatted in the red dirt and cried. I sobbed into my hands, the power of my desolation wracking my body.

Eventually, I walked around to the front of my car to view the damage flecked in blood and scaly skin. I cared little for the damage to my car, my thoughts only of the damage I had just inflicted upon the local wildlife population.

My husband, who had been driving ahead of me, realising I was no longer behind him doubled back.  Pragmatic as ever, which I often take to heart, he asked if I was hurt then surveyed the damage.  His rational ‘get it together and get back on the road’ kind of approach skewed deeply but I am one who refuses to fall into a pit of self-deprecation……although I did believe the death of the such a majestic beast warranted it on this occasion!

Car sorted (of sorts), emotions back in check (of sorts) and back behind the wheel I pulled out onto the highway.  Broken Hill after all, awaited.   My car made some noises I had not heard before and I did stop occasionally to check the front wheels, axel and bumper were still attached.

He looked how I felt……

In the afternoon light the town of Broken Hill finally came into view yet my mind was still back in Wilcannia.

I guess it is so very easy to lose perspective sometimes and forget just how damn lucky most of us are.  Even on my worst days, those difficult and terrible days, I am still acutely aware of my own privilege and for this realisation I am grateful.

Perhaps we all just need an opportunity, people who love us and those who believe in us by looking past the shitty bits to find a richness of potential.  Wilcannia just doesn’t have that yet, not everyone does, but I feel very certain it will come……..xx

9 thoughts on “What no one tells you about Wilcannia…….”