There has been the odd occasion, where I have built something up in my mind so much so the reality of it just could not possibly have lived up to what I had imagined.  Although my enthusiasm had been high, I have often been left dispirited and Sea Monkeys are a perfect example.   As a child of eight I was smitten with Sea Monkeys.  Those endearing little crown wearing nipple pink sea nymphs and their underwater world swam through my imagination and so besotted was I, I invested my entire savings (a years worth of very hard earned pocket money) on a colony of what was to be a family of my very own.

My euphoric bliss upon their arrival very quickly turned to despair as my beautiful glass fish bowl turned to nothing more than a murky pea-like-soup, with not one single little water monkey to be found.

The leading causes of death among Sea Monkeys:    1.  A fall from the castle tower.   2.  The microwave!

With travel however, I am the complete opposite.  I have absolutely no expectation and because of this, my disappointment is rare.  For me, travel is a beautiful parasol under which all my passions and hopes exist.  Also during my childhood, I had often wondered if the ocean smelt differently in other parts of the world and with all certainty I can say it does.  Everything smells different and looks different and is different and I want to keep seeing that world of difference over and over again.  And you really don’t see a city like Hong Kong until you have used its public transport system……..

Getting around Hong Kong:

Taxi! – “Get something tailor made for yourself in Hong Kong, but do not take a taxi!”  was the sage advice offered to me in the departure lounge before boarding the flight to Hong Kong.  I am however, one who firmly believes fortune favors the bold so I hailed a Hong Kong cab down like I was a seasoned New Yorker.

The cabs in Hong Kong are very clean and surprisingly inexpensive.  Those on the island and in Kowloon are red with silver tops and they are in plentiful supply.  The cabs are also metered and for the most part, the drivers are not only scrupulously honest but wonderfully friendly.  Fair warning though as your taxi ride could be as frenetic and as fast paced as the city itself as the drivers use only one speed which is ………..flat out!

My best tip for a Hong Kong cab ride is to write your destination down then ask a local to translate this to Chinese on the same piece of paper.  Hand that to the driver then buckle up for the ride of your life.  I hailed a cab on a rainy night and our trip was an absolute hoot as we slid around the bends and curves of the slippery, oil slicked and congested roads of Hong Kong before coming to a screeching halt in front of our hotel.  And I would have happily paid double for that experience 🙂

Walking –  Hong Kong, as with most great cities of the world, is made for walking.  To walk the streets and neighborhoods of any destination is always my unspoken ritual as I truly believe some things can only really be appreciated on foot.   Surprisingly, in this overcrowded city there really is an ease in which you can go about your business.  Even in the smog, soaring humidity and hum of a thousand air-conditioning units, to walk the streets of Hong Kong is pure bliss.

Octopus Card – And if not on foot, getting around is still a breeze.  Purchase an Octopus Card, available from any of the 7-11 stores.  And btw, these convenience stores are mega convenient and more popular than Starbucks!  You can use your Octopus Card on all public transport including the ferries, trains and trams, all of which are clean, reliable and very efficient.  Just try to avoid taking public transport during rush hour.

Ferry – Hong Kong is a harbour city and water transport including Sampans, Jet Foils, Junks, Cats and Ferries are everywhere.  We used the Star Ferry system which transports over 20 million people across Victoria Harbour each year.  We left the island and were over on the mainland in Kawloon in under 10 minutes all while enjoying an uninterrupted view of that impressive Hong Kong skyline. 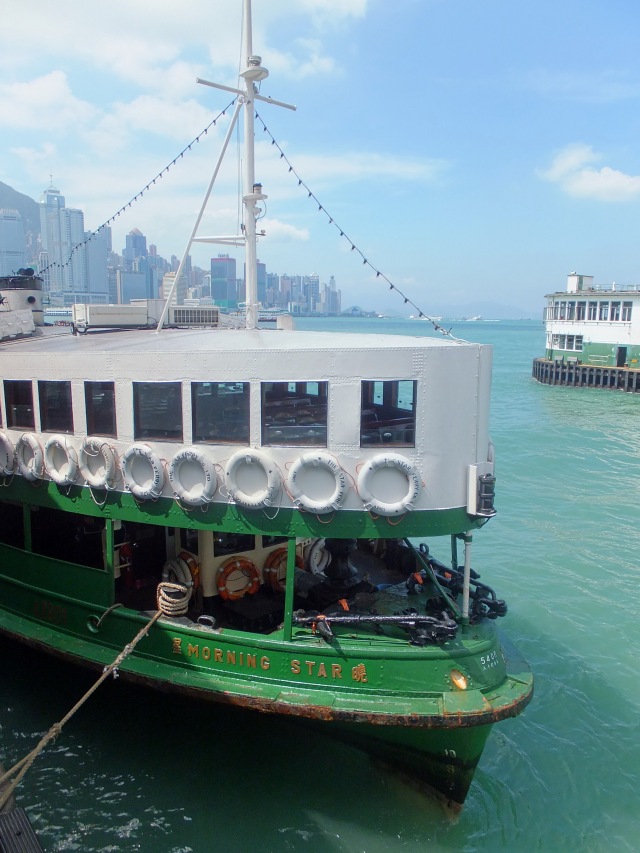 The Ding Ding –  Hong Kong’s tram system as it is affectingly known by locals, is possibly the best way to acquaint yourself with this wonderful city.  The tram line runs for almost 30 kilometers from Kennedy Town to Shau Kei Wan.  One nimble swipe of your Octopus Card will have you seeing the very best of Hong Kong and its surrounds. 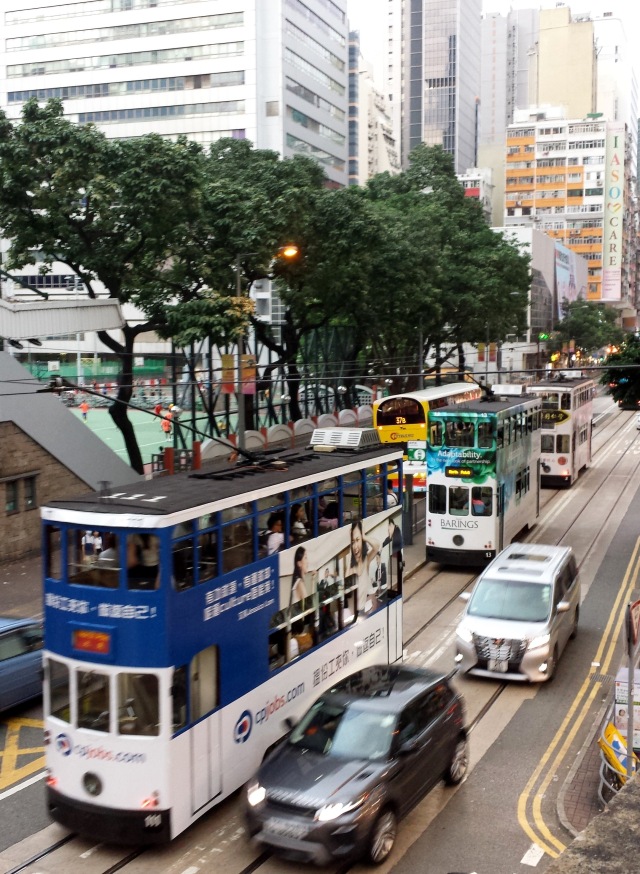 Peak Tram – And do take a ride on the Peak Tram, the worlds steepest funicular railway which opened in 1926.  A return trip is HK$ 90 which is around $15 Australian.  Once at the top, you again have the most incredible views of that breathtaking Hong Kong skyline.

Hong Kong holds the most enchanting homage to the moon with its Mid Autumn Festival.  This beautifully charming fusion of an uber modern city and its ancient traditions is celebrated with lanterns, a lantern festival, mooncakes and fire dragons. 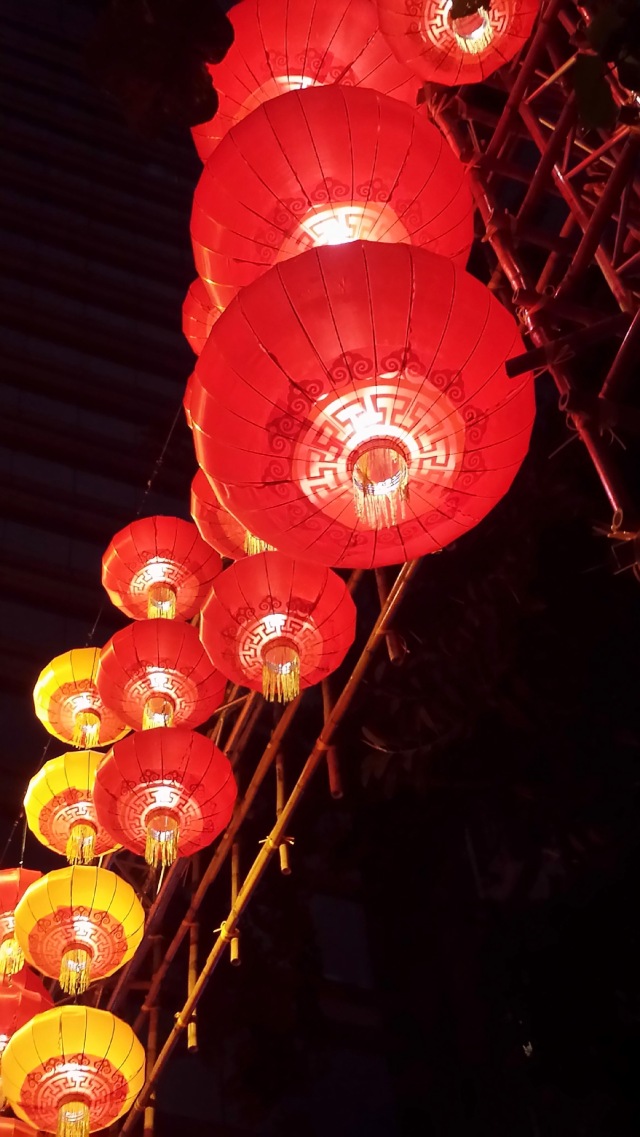 It is thought this festival evolved from the moon worshipping ceremony held by the Emperor during Autumn in ancient China and a very full and luminous moon was out on the evening we attended.

The thunder of drums and gongs signaled the arrival of the fire dragon, an amazing 67 meter long straw dragon smoking from the tens of thousands of incense sticks inserted into its body.  Amid the chaos and noise the beautifully ablaze dragon was danced through the streets by a team of around 300 people.  Tai Hang, the suburb where this ceremony we attended was held, was awash with tens of thousands of people and I can say with hand on heart, that to be in the crush of radiantly happy and exuberant Chinese folk is all you can hope for really. 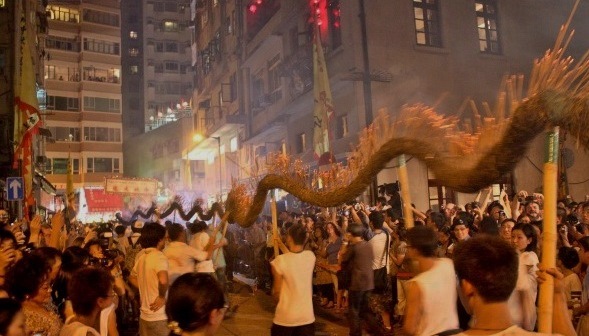 Mooncake is traditionally eaten during the Mid Autumn Festival and just as vegemite divides this great nation of ours, the same can be said of mooncake.  It is something you are either going to love or love……not so much!  Typically round to signify completeness and unity, these densely rich little delights are meant to be shared with tea.  They should however, come with a cardiology appointment as one tiny luxurious cake (approx. 10 cm in diameter), consisting of pastry encasing a filling of lotus seed paste and the salted yolk of a duck egg, can have up to 900 calories! 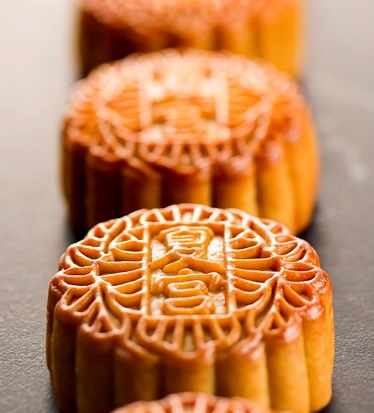 There were lights, lovely lanterns of all shapes and sizes, wishing lanterns and a wishing tree.  I do love the idea of a wish.  I still wish on a shooting star when fortunate enough to see one but I am very careful what I wish for as not all things lost to me, need be found.

To make a wish you simply write your wish on the card provided then attach this to the wishing tree.  A young boy ahead of me, writing his wish in perfect script, asked as he handed me the pen “do you know what I wished for'”.

“But if you tell me your wish, it won’t come true”  I replied.  As I helped him tie his wish to a branch he said that for a wish to come true, it only had to stay where it was tied. 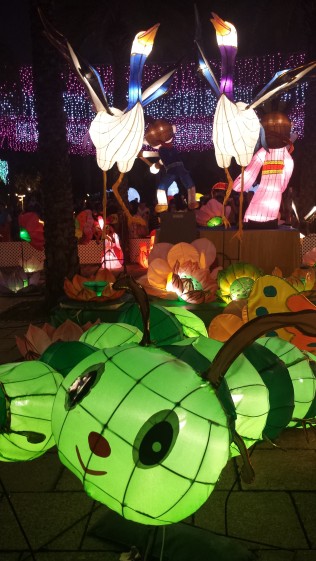 These beautiful works of art are lanterns……….

And his wish he told me, was for more mooncake and so lovely and innocent a wish, I hoped it came true………..

And this is what it means to travel.  To capture those small moments which settle over us to become as warm and as sunny as a promise.  To see difference, to restore our hope when humanity has caused such doubt and to allow bold and wondrous freedoms.

Footnote:  A strong breeze blew over and through the festival toward the end of the evening and hundreds of wishes fell from the trees to scatter throughout the parkland.  The wish I made and the wish the little boy made held fast to their branch…..

Part III Hong Kong – the ‘wet’ markets where everything is so fresh it is still alive and kicking – coming soon.

10 thoughts on “The leading causes of death among Sea Monkeys and getting the phat on mooncakes…….”