As I wrote in the blog I recently posted, I am going to try to catch my blog up after a hiatus of almost 4 months.  If you read the previous blog it will give you an idea of how the blog will eventually run full circle and it will also help you understand why.  So fasten your seat belts and acquaint yourselves with the exits because we are in for a bumpy ride……….

Once again we have indulged in the great American pastime of road tripping.  And this time I was on a road trip to true happiness.  I was headed to Graceland in Memphis Tennessee!  And a note of interest with regards to the state of Tennessee – a whale (apparently) is the only animal you are allowed to hunt from a moving vehicle!

I do love the Southern states of America.   They have an indomitable and wonderful charm about them and the heat of a Southern afternoon is like wading through tissue paper.   It is a place where the people are friendly because they have been raised to be polite, gracious and kind.  The food is great (really great) and be assured you will get the best fried chicken and waffles around.  Southerners love their confederate flag and their guns almost as much as they love the bible and they have a perversely  wonderful vocabulary which is perfect for any linguiphile.  The ‘expressions’ they use are at times mystifying yet rich and vivid.   You cannot mistake the meaning of declarations from those in the South especially when little gems such as this are uttered ‘oh she’s busier than a cat buryin’ shit on a marble floor’.  Sadly though, their ways, passion and spirit are often misunderstood and some label those from the South as ill-educated, red-necked and dumb which could not be further from the truth!  I guess there will always be those in the world who live their lives in narrow mindedness and ignorance because finding fault in others no doubt makes their own shallow lives appear more interesting.

Anyway, first stop along the way in this military precision planned trip was Tupelo.  Birthplace of Elvis.  The King!!  Not only does Tupelo offer you The King and the home in which he was born (January 8th 1935…..I’m handy to have on your table at a trivia night), but also his childhood church, civil war history and a battlefield, an automobile museum, a buffalo park, handmade chocolates and the famous Tupelo honey.

Believe it or not, there are 150 restaurants in Tupelo for a population of just over 35,000.  Who would have thought!  Although we (okay, I was) on the hunt for one place and one place only.  Johnnies Drive In.  Apparently it was one of the places Elvis liked to hang out at and it is reputed to be the oldest restaurant in Tupelo.   It was great fun and a bit of nostalgia never hurt any one.  We also, very luckily, got to sit in the same booth that Elvis liked to occupy.  After realizing we were Australians, the couple who were sitting in the booth when we arrived, gave it up for us to sit in.  See, there’s that beautiful Southern hospitality once again. 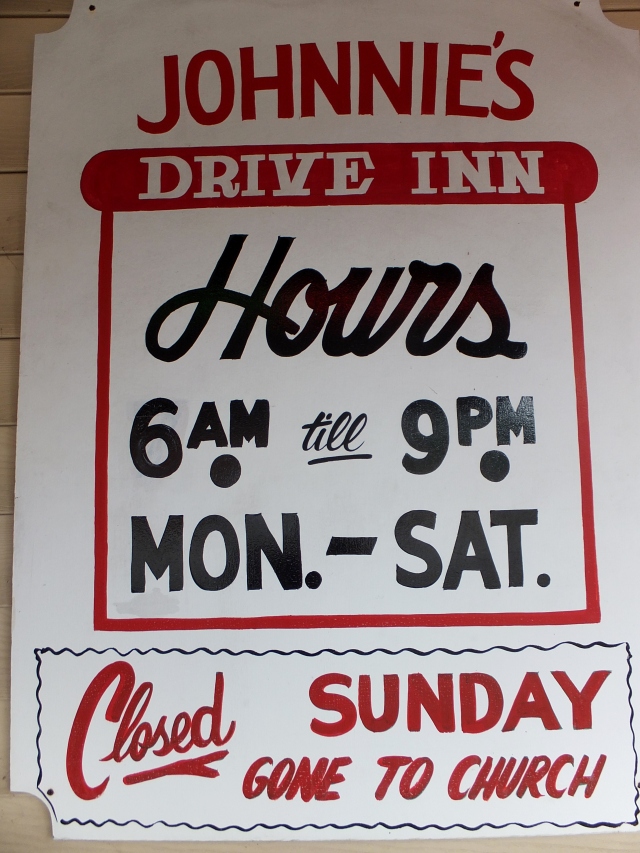 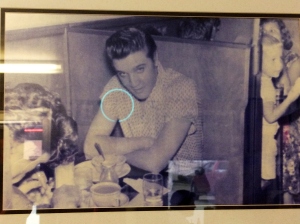 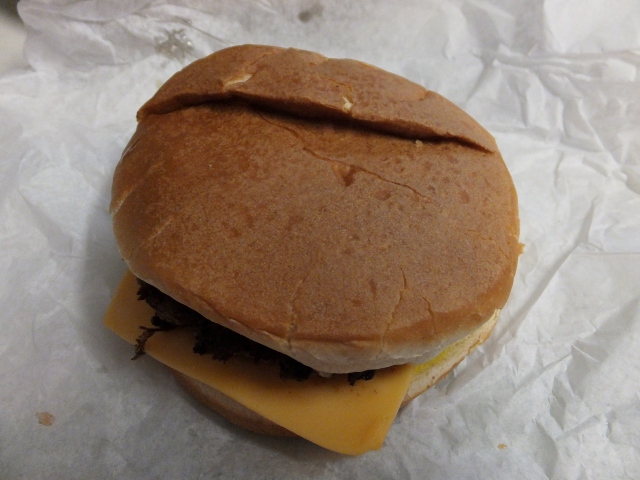 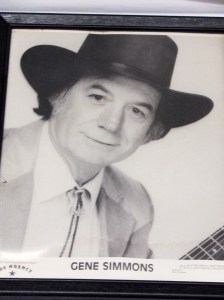 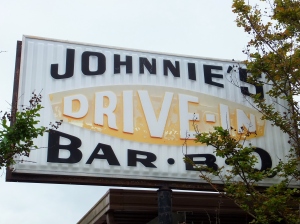 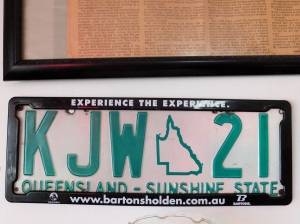 I love that wherever I seem to go I always find a little bit of John Wayne and there he was on the wall of ‘Johnnies’…..and a Queensland number plate! What tha!

Steven’s face after my suggestion of perhaps a little fried chicken and waffles on the side to finish with…..after we had eaten cheeseburgers and fried onions!  I reasoned, and I believed I had a very strong case, that we were after all in Tupelo and we may not pass this way again.

Fuelled with a rather full belly it was off to see the home where Elvis was born, the church he sang in, the family car and lots of Elvis history.

The ‘Elvis Presley Birthplace’ is a museum, an historic site and a memorial all rolled into one. It is a fascinating place to visit and it highlights the humble beginnings of one of the greatest cultural icons the world has ever seen. The grounds are beautifully tranquil and you can take as much time as you like just wandering about. 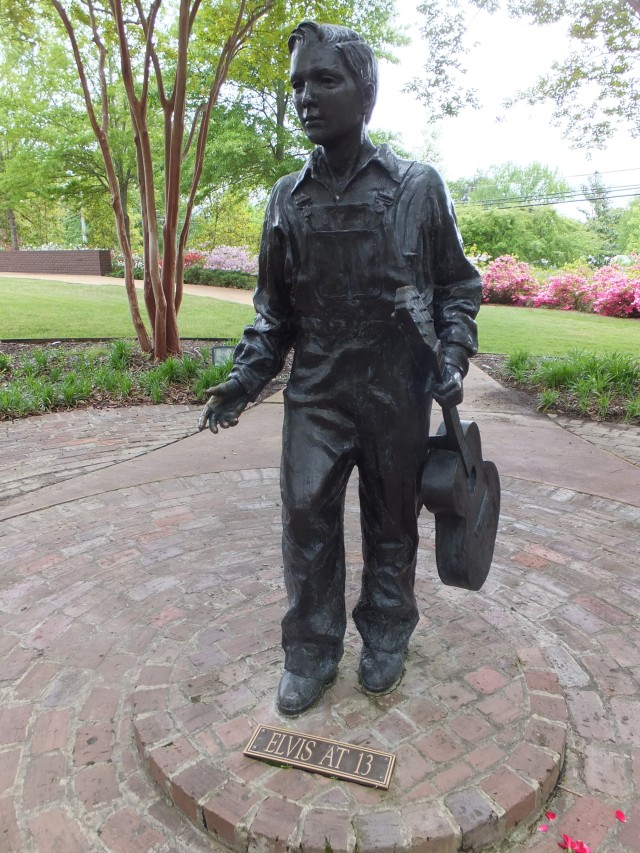 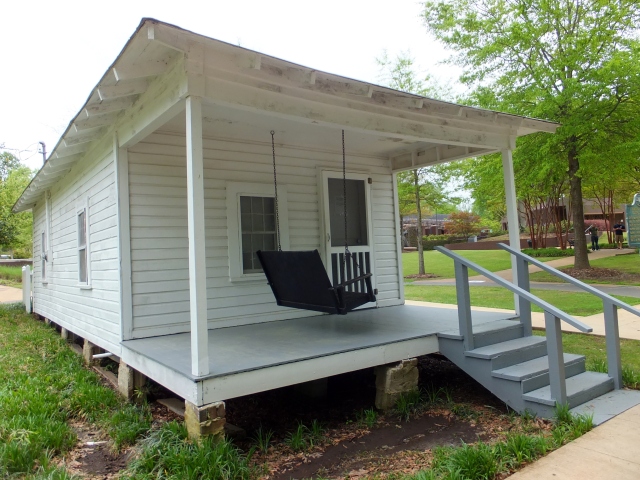 This small, neat little framed home in which Elvis was born, was built by his father Vernon Presley.  It is the type of dwelling often referred to as ‘a shotgun house’ because it is a narrow rectangular residence where you can (if you feel the need) fire a shot from the front door to the back door.

Tupelo really was a highlight and although some navigate by the stars, our wanderlust is navigated via the odd, quirky or strange attractions and very often the numerous off beat food joints…..and there is nothing wrong with that xx